Sometimes when my mind wonders off to days long gone bye I still feel as if it was yesterday when I said goodbye to my school years. That was in 1984, almost 30 years ago. Turning the clock forward, at 47 I guess I am now considered to be in my middle age years. I mention the age thing as the message in a recent e-mailed CS Lewis book extract I received centered on our middle aged years.

Some context – the extract below and the book it appears in (‘The Screwtape Letters’ of C.S. Lewis) sets out a series of lessons on the importance of taking a deliberate role in living out Christian faith. It portrays a typical human life, with all its temptations and failings, as seen from devils’ viewpoint. The book is about Screwtape, an experienced demon, who advises his nephew Wormwood how to effectively tempt humans. The book mentions a ‘patient’ which refers to a man who Wormwood continually tempts and tries to keep in spiritual darkness.

The same extract also appeared in a February 2005 edition of Reflections, a C.S. Lewis Institute monthly newsletter under the title ‘An Unrecognized Danger’ –

“ … The Enemy has guarded him from you through the first great wave of temptations. But, if only he can be kept alive, you have time itself for your ally. The long, dull, monotonous years of middle-aged prosperity or middle-aged adversity are excellent campaigning weather. You see, it is so hard for these creatures to persevere. The routine of adversity, the gradual decay of youthful loves and youthful hopes, the quiet despair (hardly felt as pain) of ever overcoming the chronic temptations with which we have again and again defeated them, the drabness which we create in their lives and the inarticulate resentment with which we teach them to respond to it – all of this provides admirable opportunities of wearing out a soul by attrition. If, on the other hand, the middle years prove prosperous our position is even stronger. Prosperity knits a man to the world. He feels he is ‘finding his place in it,’ while really it is finding its place in him. His increasing reputation, his widening circle of acquaintances, his sense of importance, the growing pressure of absorbing and agreeable work, build up in him a sense of really being at home in earth, which is just what we want. …” (C.S. Lewis. The Screwtape Letters, HarperSanFrancisco, ©1942, Harper edition 2001, pp. 154-155)

CS Lewis wrote about how fertile the middle-aged years could be for undermining faith as emotions and energy may be reduced and the race has been run for some time. Conversely, if these years are ones of leisure and ease, it could also be easy for humans to become complacent, wedded to the world, rather than focused on what God is trying to make of them. Lewis notes the danger of these years – we could become jaded and focus on the disappointments of the world, where we cease to strive toward our heavenly home and settle simply for striving to make heaven on earth.

As described in the newsletter it is not only about adversity but also about how we deal with success and prosperity where the message was that “…  Adversity is certainly a danger to our spiritual life, as anyone who has experienced it can attest. But, success and prosperity can be an even greater danger. Many of us have achieved a measure of success and prosperity and many others are on the way to achieving it. May God give us the grace to examine our lives, eyes to see the truth, and courage to take action…”. Wise words, I think.

When I read the extract again I was drawn to part of it and some comments attributed to the Screwtape character “… Prosperity knits a man to the world. He feels he is ‘finding his place in it,’ while really it is finding its place in him. His increasing reputation, his widening circle of acquaintances, his sense of importance, the growing pressure of absorbing and agreeable work, build up in him a sense of really being at home in earth, which is just what we want …”

I guess there are a number of different perspectives here. My thoughts and feelings are off course partly influenced by the worldly experiences in the city where I live (Geneva, Switzerland). As with any city, it has its own charm, character and rhythms where Geneva, by most accounts, is a prosperous place and where there always seems to be some reminder of prosperity’s ebbs and flows. This applies to both the upside and downside scenarios (those of you who read this and who also live In Geneva will understand some of the practical realities of living in one of the world’s most expansive places). 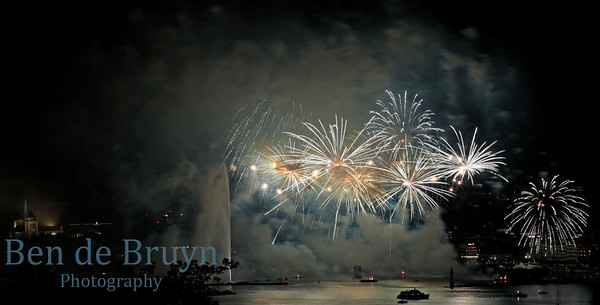 View of fireworks over lake Geneva

I can understand how prosperity could ‘knit me to the world’ and how the drive to find my place in it could easily result in the world finding its place in me. I guess this happened to me in South Africa where my primary focus was to built-up my home on earth.  On this point I have had some struggles in my mind as it is a personal belief that God wants for all his children to prosper in all respects. What I have realised over the past few years is that I can embrace it as long as I know that my focus is on God and His purposes.

In Mark 4, verses 13 – 20 (New International Version), Jesus explained the Parable of the Sower as follows:

“Then Jesus said to them, “… The farmer sows the word. Some people are like seed along the path, where the word is sown. As soon as they hear it, Satan comes and takes away the word that was sown in them. Others, like seed sown on rocky places, hear the word and at once receive it with joy. But since they have no root, they last only a short time. When trouble or persecution comes because of the word, they quickly fall away. Still others, like seed sown among thorns, hear the word; but the worries of this life, the deceitfulness of wealth and the desires for other things come in and choke the word, making it unfruitful. Others, like seed sown on good soil, hear the word, accept it, and produce a crop—some thirty, some sixty, some a hundred times what was sown…”

In 1 Timothy 6:17, Paul, as part of the advice to Timothy, advised that “… Command those who are rich in this present world not to be arrogant nor to put their hope in wealth, which is so uncertain, but to put their hope in God, who richly provides us with everything for our enjoyment …” ( New International Version)

In Isaiah 55 verses 1-3 the Lord Invites His People to Come to Him  “ … Come, all of you who are thirsty. Come and drink the water I offer to you. You who do not have any money, come. Buy and eat the grain I give you. Come and buy wine and milk. You will not have to pay anything for it. Why spend money on what is not food? Why work for what does not satisfy you? Listen carefully to me. Then you will eat what is good. You will enjoy the richest food there is. Listen and come to me. Pay attention to me. Then you will live. I will make a covenant with you that will last forever. I will give you my faithful love ……” ( New International Version)

The verses in Timothy and Isaiah have the same message to those who have been blessed with wordly wealth and those who have less and the message is the same – seek and find God for with Him there is true riches, life and His faithful love.

Ben de Bruyn - My walk to and with God